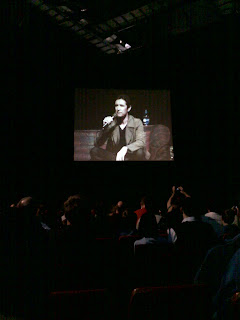 Pic by Eric, from his blog post about Armageddon

This weekend had so much packed into it, but it all came out pretty well.

Went to Armageddon Pop Culture Expo with Eric. Every year I say I won’t go back next year, but they keep bringing over people who played the Doctor, and occasionally cool comics guests. This year, 1996 Doctor Paul McGann (Eric describes that) and comics team Mike & Laura Allred. I was wearing my only comic-book t-shirt, which features the meditative and romantic Concrete character by Paul Chadwick, and Mike & Laura complimented the shirt and we talked about what Paul was up to these days (answer: commercial work, mostly, though I see from his blog he’s started on a new Concrete piece). They signed my Wolverine of Fame, and I walked Mike over to the NZ comics table where Dylan Horrocks was lurking so they could meet.

Saw more of Dylan at my real highlight of the weekend, the NZ Comics Weekend, which was absolutely buzzing with creative energy. I think I’ll talk about that in a different post, even.

Apart from that, caught up with a bunch of people who all chose this weekend to come back to Wellington for a visit, got stuck into some packing, lined up some more work, watched the new Doctor Who, and did a few quiet things for my birthday. Really nice, overall.

9 thoughts on “What a weekend”