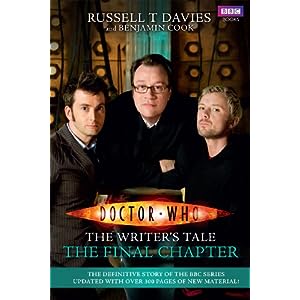 I recently read the inelegantly named Doctor Who: The Writer’s Tale: The Final Chapter by Russell T Davies and Benjamin Cook. Davies (RTD) is the man behind the recent revival of Doctor Who, taking it from embarrassing forgotten history to pop-cultural behemoth. Cook is the young Doctor Who Magazine journo who sparks up an email correspondence about RTD’s writing process. The book collects this correspondence.

It’s a mighty tome, nearly 700 pages, and it’s fascinating reading. I raced through it. There’s a lot that’s great about it, as RTD writes expressively about his creative process, how his ideas come together, and where the final product comes from.

Although the book claims to be about the writing process, and that’s what I’ll talk about below, most of its length is about the production of the Doctor Who television show and all the challenges and problems involved. The writing focus fades away after the first hundred-fifty pages, never to return; the writing process becomes a scaffold to talk about what it’s like making Doctor Who in the UK in the late 00s. While I think the writing bits are great and useful for any writer, the rest of the book is really of interest only to people curious about TV production or about Doctor Who. It’s sold a lot of copies, so there’s clearly plenty of people in that category, but the writing sadly becomes less important as the book proceeds.

RTD’s time on the show has not been universally praised. His stories have been criticized for being over-stuffed, poorly structured and too reliant on deus ex machina endings. In this book you can see all of those flaws and limitations at work. For example, the sense that RTD doesn’t do endings well is clearly because he writes in sequence and usually doesn’t have a definite climax in mind.

You even get RTD’s defence of some of these flaws. Memorably, acknowledging criticisms that his scripts don’t develop plots effectively but just throw in incident and then race on to the next thing, he says (p679):

What I’m saying is, I can see how annoying that looks. I can see how maddening it must be, for some people. Especially if you’re imposing really classical script structures, and templates, and expectations on that episode, even unconsciously. I must look like a vandal, or a kid, or an amateur. No wonder some people hate what I write. Of course, I’m going to win this argument. (Did you guess?) Because the simple fact is: all those things were planned. All of them were my choice. They’re not lazy, clumsy or desperate. They’re chosen. I can see more traditional ways of telling those stories, but I’m not interested. I think the stuff that you gain from writing in this way – the shock, the whirlwind, the freedom, the exhilaration – is worth the world. I’ve got this sort of tumbling, freewheeling stule that somersaults along, with everything happening now – not later, not before, but now now now. I’ve made a Doctor Who that exists in the present tense.

However, most of these problems are not really dealt with and Cook isn’t interested in going on the attack about them. This is a shame in lots of ways. I would love to see Davies defend himself over the decision at the very end of his final episodes to marry off the two black characters in his ensemble, apparently for no other reason than they’re both black. But this isn’t even mentioned in the correspondence.

I think the book also does a good job showing Davies’ strengths as a writer – his sure-footed dialogue and ability to write to the constraints of TV production, his ability to edit and strengthen the work of other writers, and most of all his gift for great moments. Time and again you see how his ideas begin with one or two key scenes that he is confident will make great telly, and then he develops a script around them. And they are truly great moments. The revival episode of Doctor Who, “Rose”, finished with such a moment that had clearly been in Davies’ head for a long time. I wrote about it five years ago: “The last shot of the episode – that last one second – it just about made me cry.” This bit:

6 thoughts on “The Writer’s Tale”